THE CASE FOR QUOTATION MARKS IN 1ST CORINTHIANS

The understanding of 1st Corinthians is radically altered by the addition of quotation marks. They impart clarity to passages considered by many as amongst the most confusing of Paul’s writings.

Note: ‘Those of Chloe are in the same context as ‘those of Apollos’ etc.  It can be concluded that ‘those of Chloe’ feel they have less recognition because their origin is a woman. Much of 1st Corinthians relates to the worship of origin.

Chapter sixteen reveals the identity of the church messengers (angels) – they supplied ‘what was lacking’ from the church (1 Cor. 16:17). It seems a logical conclusion that they delivered the letter that Paul is replying to and are ‘those of Chloe’ referred to in chapter one. Paul also makes the point they were the first converts, therefore making a point that if origin matters, they were first – and a fair conclusion is that their origin was Chloe (a woman) –

“You know that the household of Stephanas were the first converts in Achaia, and they have devoted themselves to the service of the Lord’s people. I urge you, brothers and sisters, to submit to such people and to everyone who joins in the work and labours at it.  I was glad when Stephanas, Fortunatus and Achaicus arrived, because they have supplied what was lacking from you.  For they refreshed my spirit and yours also. Such men deserve recognition.” 1 Cor. 16:15-18

From the background to the letter it can be seen that there are many voices throughout 1st Corinthians. It is logical that Paul would quote the concerns they had written about, and the messengers had spoken of –

A letter the church had written

The response of Paul

A clear example of contradictory passages is found in chapter 14, two opposite views within three verses –

It would appear that the Church at Corinth believed that tongues were a good sign for unbelievers, but Paul thought that unbelievers would see them as a sign of madness.

An example of 1st Corinthians contradicting what Paul has written elsewhere is found in 1 Cor. 14:34 where it is written that women are to be in submission as the law says, yet in Galatians Paul says those led by the spirit are not under the law –

The contradictions throughout 1st Corinthians are erased by the discerning addition of quotation marks, examples below –

(Red being the words of the church)

So But if the whole church comes together and everyone speaks in tongues, and inquirers or unbelievers come in, will they not say that you are out of your mind?  But if an unbeliever or an inquirer comes in while everyone is prophesying, they are convicted of sin and are brought under judgment by all,  as the secrets of their hearts are laid bare. So they will fall down and worship God, exclaiming, “God is really among you!” What then shall we say, brothers and sisters? When you come together, each of you has a hymn, or a word of instruction, a revelation, a tongue or an interpretation. Everything must be done so that the church may be built up.  If anyone speaks in a tongue, two—or at the most three—should speak, one at a time, and someone must interpret.  If there is no interpreter, the speaker should keep quiet in the church and speak to himself and to God.

Two or three prophets should speak, and the others should weigh carefully what is said.  And if a revelation comes to someone who is sitting down, the first speaker should stop. For you can all prophesy in turn so that everyone may be instructed and encouraged. The spirits of prophets are subject to the control of prophets.  For God is not a God of disorder but of peace—as in all the congregations of the Lord’s people.

“Women should remain silent in the churches. They are not allowed to speak, but must be in submission, as the law says.  If they want to inquire about something, they should ask their own husbands at home; for it is disgraceful for a woman to speak in the church.”

Or WHAT! did the word of God originate with you? Or are you the only people it has reached?  If anyone thinks they are a prophet or otherwise gifted by the Spirit, let them acknowledge that what I am writing to you is the Lord’s command.  But if anyone ignores this, they will themselves be ignored.  Therefore, my brothers and sisters, be eager to prophesy, and do not forbid speaking in tongues.  But everything should be done in a fitting and orderly way.

2 Now I commend you for remembering me in everything and for maintaining the traditions, just as I passed them on to you. 3 But I want you to understand that the head of every man is Christ, but the head of the woman is man (singular talking about Eve), and the head of Christ is God.

“Every man who prays or prophesies with his head covered dishonors his head. And every woman who prays or prophesies with her head uncovered dishonors her head, for it is just as if her head were shaved. If a woman does not cover her head, she should have her hair cut off. And if it is shameful for a woman to have her hair cut or shaved off, she should cover her head.  A man ought not to cover his head, since he is the image and glory of God; but the woman is the glory of man. For man did not come from woman, but woman from man. Neither was man created for woman, but woman for man.”

For this reason a woman ought to have authority over her head, because of the angels (messengers). In the Lord, however, woman is not independent of man, nor is man independent of woman.  For just as woman came from man, so also man is born of woman. But everything comes from God. 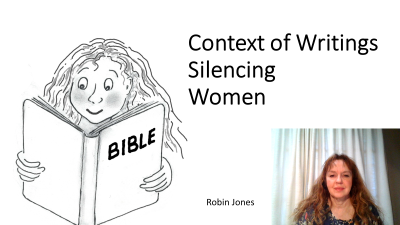