Click on chart below until right size for viewing – 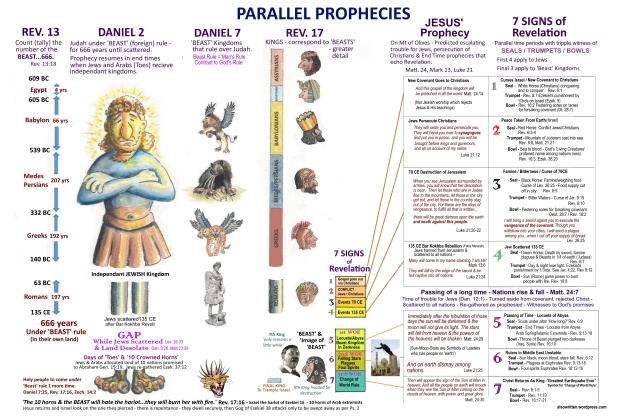 Signs of Jesus return have been described in great detail in Daniel, Revelation, Joel and other places. As per Revelation 16 the Euphrates dries up to prepare the way for the Kings of the East.  Foul spirits go out from there via the mouth of the Dragon the Beast and the False Prophet to gather local armies and armies of the entire world to the one place. These events have happened in Syria and Iraq.

The Kings of the East (Iran – identified in Daniel 8 and the much overlooked prophecy of Enoch – See Book of Enoch is it Scripture?) gain power on the other side of the Euphrates – They are the ‘Little Horn’ of Daniel 7  and the 8th head of the Beast of Revelation 17.  They morph from the 7th head that was Hitler with the same spirit to wipe out the Jews. They are additional to the 10 horns –  described  as rising among 3 of the last day  nations surrounding Israel.  They rise from their place to invade Israel (perhaps initially via their proxies) 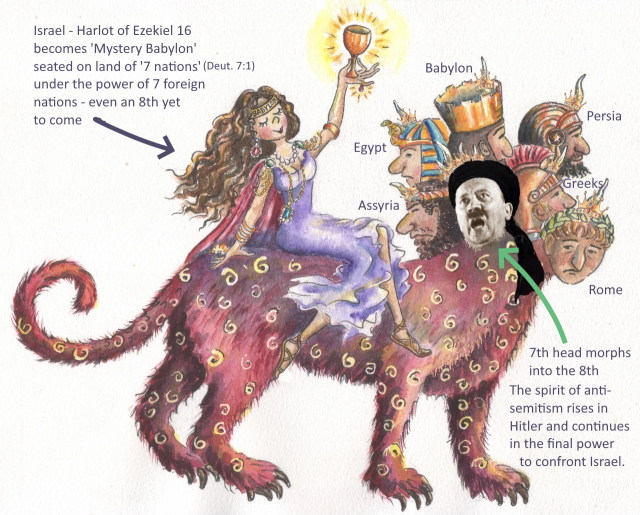 There have been many signs in the political heavens of the Middle East.  The Ottoman Empire dried up allowing the last day division of the land.  Saddam fell as a star to earth in a similar way to Nebuchadnezzar. His power in the Euphrates dried up and the Arab Spring of locusts flew out of the bottomless pit (described in Joel).  ISIS controlled the Euphrates valley for a 3.5 year witness before they also dried up and  opened the gates for Iran to get a hold amongst Hezbollah and a footing in Iraq, Syria and Lebanon.  There has been great distress among these nations with people’s hearts failing for fear, and a witness of refugees the world can’t cope with.

What is left to happen ?

The stage is set – Jesus comes as a thief to gather His elect who are with Him at His return – they meet Him in the air.

“We who are alive and remain will be caught up together with them in the clouds to meet the Lord in the air.” 1 Thess. 4:17

Israel will be attacked by the final ‘Beast’ power of  Revelation 17 – Iran with the help of it’s proxies in the name of a Holy War as per Joel 3.  They will reek havoc in Israel – the Beast will attack the harlot and leave her body in the streets of Jerusalem for 3.5 days (see Revelation A Message to Israel).  Jesus will return to Israel in turmoil from a hugely successful attack against them  – Israel will look on the one they pierced and mourn – “You will not see me again until you say blessed is He that comes in the name of the Lord” Matt. 23:39.

This is a Holy War as per Joel 3 – the call goes out via the False prophet (Radical Islam) of Rev. 16.  Jesus returns –  and is established on God’s holy hill , Psalm 2 etc. It is followed by a war for the spoil as per Ezekiel 38.  The Gog invasion occurs  when Israel are finally dwelling securely.  They only dwell securely “without bars and gates” because Jesus has returned – See:        They Shall Dwell in Security

We have witnessed the lead up to these events. Israel and the surrounding nations revived and given power to rule – more signs in the heavens – 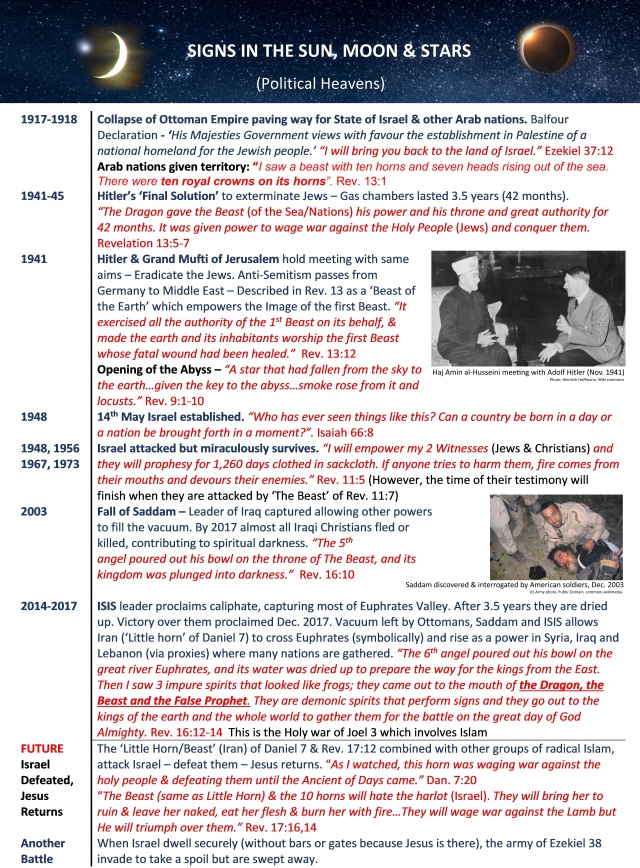 The visions given in Revelation incorporate the symbols used in Genesis – the same symbols that are woven into the Bible by perhaps 40 authors, spanning a 1,500-year period. It is more evidence that God was ultimately directing the writing of this book.

There are 2 creation stories in Genesis. In chapter one man and woman are both created in God’s image.

In chapter 2  morality is introduced. Adam is taken from the earth and Eve is taken from man. A serpent deceives, sin enters the world – the future redemption is via the seed of the woman. 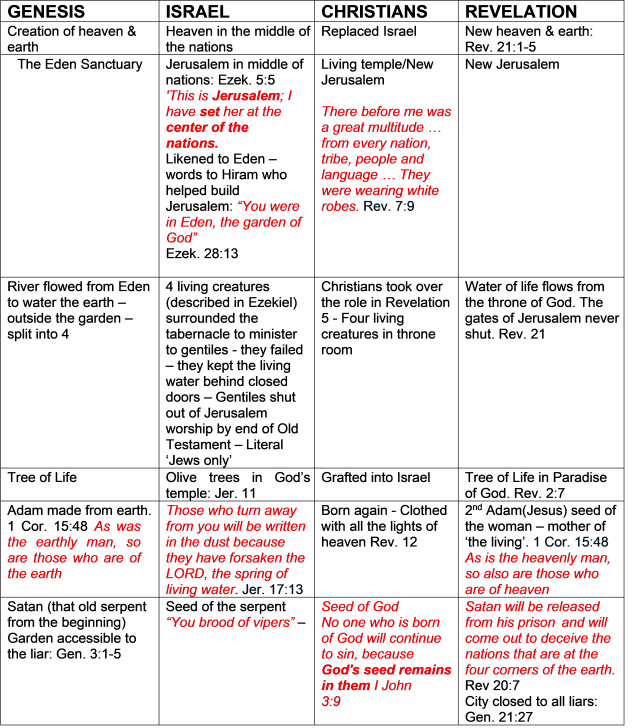 For more detail watch the youtube – Revelation A Message to Israel