Re-Thinking How We Read the Old Testament

The inspired words of God’s prophets declare His righteousness. However, parts of the Bible are not revelation of Divine truth such as the words of Job’s friends.  That said, the production of the volume known as the Bible is clearly God’s work through His Spirit.

“Every scripture inspired of God is also profitable for teaching, for reproof, for correction, for instruction which is in righteousness:”  English Revised Version – correct translation of 2 Tim. 3:16. (See: How is the Bible Inspired)

This passage is endorsing the inspired scriptures of the Old Testament to which it refers – not all scripture contained in the volume we know as the Bible.

There is a need to understand whether the history books of Ezra/Nehemiah were correct and are profitable for instruction in righteousness, or whether they fall into the catagory of Job’s friends and claim to be the will of God but are not. The contemporary prophets  condemn the final actions of the Jews in the Old Testament.  Zechariah who was present at the building of the second temple was murdered by the Jews.  Fortunately God inspired the writers of Ezra and Zechariah to date their comments and actions to the reign of Darius so we can see that Zechariah was condemning the Jews while the building of the temple was taking place. At the same time the Book of Ezra is praising the actions of the Jews. Zechariah was murdered after the temple was completed as per Jesus comment –

“Zechariah son of Berekiah (son of Iddo), whom you murdered between the temple and the altar.”Matt 23:35 (See Last Events of Old Testament – Right or Wrong?)

Not all scripture reflects what God wants done, or is for training in righteousness – some is to see where others went wrong and learn from it –  reflecting  what people did and said according to mans perspective. This is not profitable to copy, but profitable to avoid. The history books at the end of the Old Testament were written from a Jewish male perspective as were the histories of all ancient nations – Sumerians, Akkadians, Assyrians, Babylonians, Persians, Egyptians etc. It was a patriarchal world.

This explains why 90% of the people named in the Old Testament are men – largely due to the lineage lists which didn’t include women. This custom of leaving women out also explains why even New Testament writers left Mary out of her own lineage in Luke 3, why the number present at the feeding of the 5,000 was generally in terms of men present, and why no mention is made of the women at the last supper who came under the umbrella of ‘disciples’.  It was a ‘known’ thing that of course the Passover was for entire families to keep.  The 12 got a special mention because it was one of the 12 who would betray Jesus – as opposed to all the rest. (See: Missing Women at the Last Supper)

The Old Testament ends with the Jews searching their lineage so they could be accepted after their return from Babylon. In contrast to this the New Testament opens with John the Baptist telling them that God can raise children to Abraham from the stones.  Jesus came and showed how the Law should have been applied. It is in understanding this that we see more clearly where the Jews went wrong. 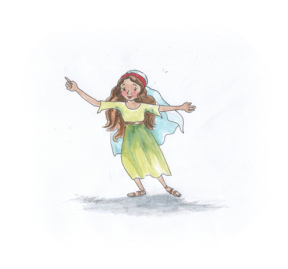 Jesus showed that it was never about literal Jewish male lineage – neither being Jewish nor male was what mattered – John 1:13

He came to that which was his own, but his own did not receive him. Yet to all who did receive him, to those who believed in his name, he gave the right to become children of God— children born not of natural descent, nor of human decision or a
husband’s will, but born of God.

The revelations of Jesus  were not new teachings – they were showing what should have always been known under the Law of Moses – things  Jesus expected Nicodemus the teacher to know. In a patriarchal world, God’s teachings were extraordinary – we have to discern which parts of scripture  God endorses to copy, and which parts are there to show the customs of men to avoid.

If we think we should cut people off because the Jews excluded foreigners, then we will be going as far astray as they did.  The so called enemies of Joshua and Zerubbabel who wanted to help build the temple were enemies from the Book of Ezra perspective.  We have to discern if the Ezra perspective was God inspired or only reflecting the Jewish interpretation of cutting off foreigners.  Ezra himself was not God’s prophet, he was a scribe and  “teacher of the Law” with a glorified lineage – in contrast to this the author of the 4th Gospel lost their identity and wrote from the perspective of ‘a beloved disciple’ because earthly lineage never mattered.

Comparing records we see that the Jewish temple was stained with the blood of Zechariah – Why wasn’t this event recorded in the Old Testament? Zechariah was God’s beloved prophet.

See the comparison below

Notice that Zechariah was preaching in the 4th year of Darius –  I love the way these 2 events ( In Ezra & Zechariah) are actually dated so we can compare them. The temple was completed in the 6th year of Darius – During its completion in the 4th year of Darius, Zechariah was saying that their hearts were set like flint and they didn’t listen to God – harsh words – we later find out from Jesus that he was murdered for his message. If we didn’t bother searching this out we would take the words of Ezra at face value and think the Jews were right to reject the foreign offer of help “You have no part with us in building a temple to our God. We alone will build it for the Lord, the God of Israel” Ezra 4:3

Yet comparing this exclusive Jewish attitude with the words of God’s earlier prophets like Isaiah (who Zechariah alluded to) we find God wanted foreigners to help build his temple – Is 56:7 “My house will be called a house of prayer for all nations.”

Jesus’ words in John 1:13 were not a new teaching, they were just not understood by those who couldn’t see beyond the surface of legalism

He came to that which was his own, but his own did not receive him. Yet to all who did receive him, to those who believed in his name, he gave the right to become children of God— children born not of natural descent, nor of human decision or a husband’s will, but born of God. John 1:13

Under God’s true law, Jews were never above gentiles of faith, men were never the rulers over women of faith.  Children born of God were always equal, but not so in a Jewish patriarchal society which required proof of birth to claim ones heritage and only listed men in genealogies –this was of man, not of God.

From Jesus we know that Moses gave the Jews laws for their ‘hardness of heart’ and the Jews kept adding to those laws. We also know that Moses did not write the Torah in its present form but unknown Jews added commentary which talked about Moses and attributed motives to God.

For it was the LORD himself who hardened their hearts to wage war against Israel, so that he might destroy them totally, exterminating them without mercy, as the LORD had commanded Moses. Josh 11:20

Alarm bells should ring when we read this verse – if God commanded Moses to exterminate everyone without mercy, then why was this law broken (with approval) before they even conquered the land?  Deuteronomy 7 said to show no mercy, destroy totally, make no covenants or marriages with the inhabitants of  the land.

“You must destroy them totally. Make no treaty with them, and show them no mercy. Do not intermarry with them. Do not give your daughters to their sons or take their daughters for your sons” Deut. 7:2-3

Yet the 2 spies made a covenant with Rahab, showed her mercy,  she married into Israel and became the ancestor of Jesus. The point is made of this by including her in the genealogy of Matt. 1 along with all the other foreign women in the line of Jesus, and also Uriah the Hittite.   Jesus advocated showing mercy, and it’s only by God’s mercy we will be saved.  Consider events in the table below which seem to contradict the surface teachings of THE LAW

There have always been those who saw beyond the literalism of the Law and understood that mercy triumphs over judgement.  The beatitudes of Matthew 5 show how Jesus interpreted the Law of Moses as it should always have been applied – mercy over judgement.  “Blessed are the merciful for they will be shown mercy”.  Matt 5:7

See also How is the Bible Inspired ?

1 Response to Re-Thinking How We Read the Old Testament