Posted on February 7, 2017 by alsowritten

The answer is simple, they are all describing the land of Israel and her neighbours.

God originally promised the land of 10 nations to Abraham –

“To your descendants I have given this land—from the river of Egypt to the great River Euphrates— 19the land of the Kenites, Kenizzites, Kadmonites, 20Hittites, Perizzites, Rephaites, 21Amorites, Canaanites, Girgashites, and Jebusites.” Gen. 15:18-21

NIV GEN 15:13-16 “Know for certain that for four hundred years your descendants will be strangers in a country not their own and that they will be enslaved and mistreated there. But I will punish the nation they serve as slaves, and afterward they will come out with great possessions. You, however, will go to your ancestors in peace and be buried at a good old age. In the fourth generation your descendants will come back here, for the sin of the Amorites has not yet reached its full measure.”

In other words, God would not destroy the nations of the land until they were completely wicked, when the good influence of Melchizedek had gone.

Not all the land was promised to the children of Israel.  God said in Deut. 2:9

“Do not harass the Moabites or provoke them to war, for I will not give you any part of their land. I have given Ar to the descendants of Lot as a possession.”

Gen. 17: 20 And as for Ishmael, I have heard you: I will surely bless him; I will make him fruitful and will greatly increase his numbers. He will be the father of twelve rulers, and I will make him into a great nation.

Josh. 24:3-4  And I took your father Abram from the other side of the river, and I guided him through all the land, and I multiplied his seed; 4and I gave to him Isaac, and to Isaac Jacob and Esau: and I gave to Esau mount Seir for him to inherit: and Jacob and his sons went down to Egypt, and became there a great and populous and mighty nation: and the Egyptians afflicted them.

When the LORD your God brings you into the land that you are entering to possess, and He drives out before you many nations—the Hittites, Girgashites, Amorites, Canaanites, Perizzites, Hivites, and Jebusites, seven nations larger and stronger than you. Deut. 7:1

Rev. 17:9-10 The seven heads are seven mountains on which the woman sits. There are also seven kings.

“The seven heads are seven mountains on which the woman sits. There are also seven kings (kingdoms). Five have fallen, one is, and the other has not yet come; but when he does come, he must remain for only a little while.” Rev. 17:9-10

Israel lost her place as the light to the nations and became ‘the Harlot who sat on 7 hills’ – The 7 nations she was given in the Promised Land.

In Bible symbology a horn describes power. There are 10 powers around Israel that want to wipe her off the face of the earth – The habitations of 10 Arab nations described in Psalm 83 –

“With one mind they plot together, they form an alliance against You” Ps. 83:5 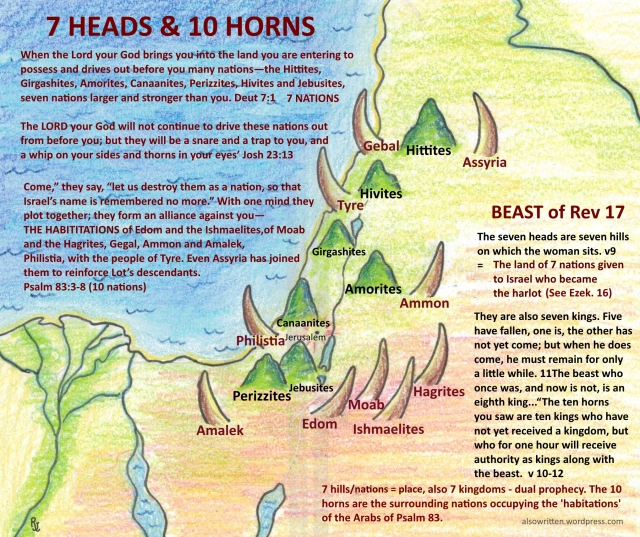 The number of crowns depicts the time period of the prophecy.

When there are 7 crowns it’s talking about the days when Herod the Great ruled the land of 7 nations (Israel).  When there are 10 crowns it depicts the ‘Days of the End’ when the Arabs and Israel are allotted their own countries again, the days of the ’10 toes’ of Daniel 2. 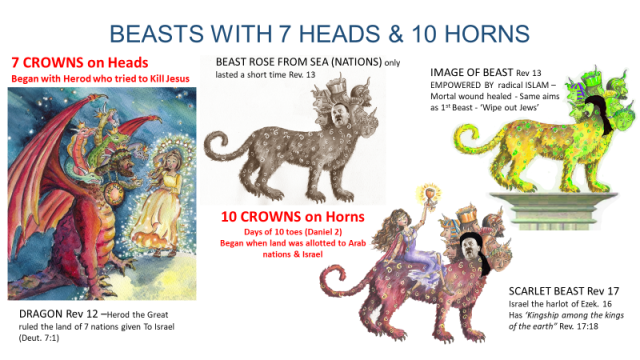 Whatever way you look at it, The Middle East is the area of 7 heads and 10 horns