The context of this passage is given in verse 44

“So you also must be ready, because the Son of Man will come at an hour when you do not expect him.”

The purpose of this passage is to make sure we are ready to meet Jesus – not to discourage looking for His return.

The wise men of the ast knew  to expect Jesus first coming and were watching for it. We can likewise understand the time of His second coming and Daniel gives us a timeline with the words “the wise will understand”  (See ‘The Seals are Opened‘ )

Daniel understood prophetic times, and Jesus told us to understand what Daniel wrote –

“So when you see the abomination of desolation spoken of by the prophet Daniel, standing in the holy place, let the reader understand.”  Matt. 24:15

Daniel knew from Jeremiah’s prophecies that the accomplishment of the ‘desolation of Jerusalem’ would be 70 years.

“In the first year of Darius son of Xerxes a Mede by descent (ruled with Cyrus 539 BC), who was made ruler over the Babylonian kingdom – in the first year of his reign, I, Daniel, understood from the Scriptures, according to the word of the Lord given to Jeremiah the prophet, even 70 years for the accomplishment of the desolation of Jerusalem.” Dan. 9:2

Daniel saw that the 70 years were up in the first year of Darius the Mede  – the year 539 BC  when Cyrus the Persian conquered Babylon.   The whole 70 years coincided with Jerusalem coming under foreign rule – it’s desolation.  First by the Egyptians, then the Babylonians. 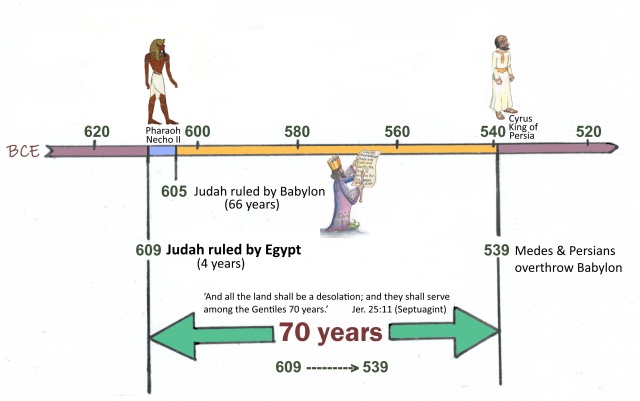 609 BC was when God’s continual covenant with Israel was broken and they came under foreign rule without a rightful King – a situation that would continue until the crown is restored to its rightful owner – it was pivotal year.

‘You profane and wicked prince of Israel, whose day has come, whose time of punishment has reached its climax, this is what the Sovereign Lord says: Take off the turban, remove the crown. It will not be as it was: The lowly will be exalted and the exalted will be brought low. A ruin! A ruin! I will make it a ruin! The crown will not be restored until he to whom it rightfully belongs shall come; to him I will give it.’ Ezek 21:25-7

Daniel knew the 70 years was up in 539 BC, Babylon had fallen…but still no word had gone out to return to Jerusalem.  Daniel realised this so he prayed. As soon as he petitioned God the word went out.  But God had bad news for Daniel, it was going to take 70 ‘7’s before the Jews and Jerusalem would be restored – this included ‘THE GAP’ when the Jews would again be dispersed and the land desolate.

“From the time that the continual [?] shall be taken away, and the abomination that makes desolate set up, there shall be one thousand two hundred ninety days.”

The pivotal point is 609 BC – the death of the last good King Josiah, and the point is made that even he turned aside from God’s command on the plain of Megiddo

2 Chron 35:22 “Josiah, however, would not turn away from him, but disguised himself to engage him in battle. He would not listen to what Necho had said at God’s command but went to fight him on the plain of Megiddo.”

So when God gave the Daniel 12 prophecy to Daniel and referred to the time of the “turning aside” Daniel would have understood it to mean 609 BC – when even Josiah turned aside and was cut off in the valley of Megiddo – and when God turned aside or took away His covenant with the Jews because they turned away from Him. 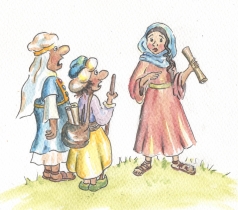 2. Setting up of Abomination that makes desolate

3. The Time of Blessing

This can’t be talking about literal days because the time of Blessing did not arrive. It has to be the ‘day for a year’ interpretation that God employs – 40 days spying out the land became 40 years in the wilderness etc.  Let’s apply the day for a year principle

682 CE  ( add a year when passing zero ) – Abd Allahibn al-Zubay conquered Mecca and stopped pilgrims coming to the Hajj.  Abd al-Malik the Umayyad Caliph, responded by creating a new holy site. He designated the Temple Mount in Jerusalem to be the place of the “Farthest Mosque”. Jerusalem was now a holy site for Islam. Dome of Rock built soon after.  This set in place the reason that Jerusalem will be fought over – and why it is the ‘cup of reeling’ described by Zechariah (Read Zechariah chapters 12-14)

2017  – The ‘Time of Blessing‘ brings us to the time described in Rev 1:3 when those who understand the word attend to it, because the “Time is at Hand”

This is not the time Jesus returns but the beginning of a critical period prior to it.

2017 was a critical year for Iran, the final head of the ‘Beast’ that unites with the horns of Rev. 17 and attacks Israel – the ‘harlot’ of Revelation 17 –

The ten horns you saw are ten kings who have not yet received a kingdom, but will receive one hour of authority as kings, along with the beast. These kings have one purpose: to yield their power and authority to the beast. Rev. 17:12

I also wanted to know about the ten horns on its head and the other horn that came up, before which three of them fell—the horn whose appearance was more imposing than the others, with eyes and with a mouth that spoke words of arrogance. As I watched, this horn was waging war against the saints and prevailing against them, until the Ancient of Days arrived. Dan. 7:20-22

To read in the news how critical 2017 was to Iran, and about its land bridge to arm Israel’s enemies See https://honestreporting.com/iran-land-bridge-threat-israel-middle-east/

We are told to proclaim (as John the Baptist did) that the time is near and Jesus is coming soon.

“Blessed is the one who reads (perceives) the words of this prophecy, and blessed are those who hear it and attend to what is written in it, because the time is near.” Rev. 1:3

Revelation was giving more detail  where Daniel left off-

Many significant events occurred in December 2017 that are described in Revelation.  Isis lost their control along the Euphrates and were declared defeated – in symbol the Euphrates drying up – allowing the Kings of the East (Iran) to fill the power vacuum left by ISIS and rise among it’s proxies (little horn rising of Daniel 7 & 8). The OIC declared  East Jerusalem should be the Palestinian capital. The events described by the 6th Seal, Trumpet & Bowl of Revelation are all in place.

The religious Jews saw 2017 as a significant date. They celebrated 70 years with this  temple coin. They likened Trump to Cyrus who proclaimed after 70 years for Babylon –

“And He charged me to build Him a house in Jerusalem”

They are hoping to build a third temple but fail to see that Jesus is the true temple – They are “in the temple” thinking they are the people of knowledge yet have rejected their Messiah. Paul’s description of the Man of Lawlessness applies to them. They have believed the lie of the serpent that they can be ‘Like God’ but rejected the ‘Truth” – Jesus, who could save them.  See The man of Lawlessness  who is seated in God’s temple.

We are in a special period at the end of time. These are the days of Elijah, the time to ‘attend to what is written’. Blessed are those who understand the prophecies like the ‘Abomination of Desolation in the Holy place’ (let the reader understand) and proclaim the first and second coming of Jesus.

God decreed in Daniel 9 that there would be more than one ‘Desolation’ in the Holy Place. See Daniel 11 – Context of the Abomination of Desolation for the desolation that was the Death of the Messiah.

The Prophecies of Daniel, Jesus & Revelation fit ‘hand in glove’ – Click on Chart below until right size for viewing

Also relevant   Revelation – The Time is at Hand

Another voice in the wilderness
View all posts by alsowritten →
This entry was posted in Daniel, Daniel 12 Time of Blessing, Revelation and Daniel and tagged 1290 days, 1335 days, alsowritten, Christ is Coming, Coming of Jesus, Daniel 12, Desolation of Jerusalem, Kingdom of Heaven at Hand, repent, resurrection, Second Coming, The rapture, The Time is At Hand, Time of Blessing, Yom Kippur 2016. Bookmark the permalink.

9 Responses to DANIEL 12 – Time of Blessing